I’ll get back to documenting my theater reviews soon.  I’ll be going to several plays this weekend and will set them up over the next few days, but until then, more about food!

I have been trying meal kits over the last couple of months and love them.  Early in life I enjoyed baking for friends and for many years was known as the cookie man as I baked thousands every year as Christmas gifts.  This became impractical as I moved from owning large homes to squeezing into a New York apartment (and kitchen!)  I turned then to cooking meals, even taking a course in fine cuisine at a New York culinary school.

In the last few years the demands of my job overwhelmed me and I pretty much shut down cooking even though I possessed an impressive kitchen arsenal of fine cooking tools.  Enter meal kits to solve the no-time-to-shop-can’t-decide-what-to-cook-hate-to-waste-all-that-extra-food blues.

A meal kit is a choice of weekly recipes that include not only full illustrated instructions but the exact amount of food needed to prepare them.  The two I have tried are $9.95 per meal (you get two in a standard order) which is cheaper than what I can order out for in New York.  And the food is fresh with no waste and with new and somewhat exotic ingredients or spices I may not try and can be hard to find even here.  Best of all, it is usually not a fixed subscription where you can skip weeks and sometimes order more or less than the standard issue.

First I tried Blue Apron which is pretty good but found the limited order options, constant starch component, limited cooking method blues in the process.  Also they had a maddening habit of undersupplying the protein component which really bugged me.

Then I discovered Home Chef and I was hooked.  They do not try to limit themselves to a 30 minute limit so they do more roasting and longer stove top cooking when needed.  They also do not skimp on the protein component, sending full chicken thighs instead of the slivers that are supplied by Blue Apron and a full pork tenderloin instead of the segment supplied by, well, you know.

And their menu options are terrific!  Usually about 6 omnivore options, four vegetarian options, one breakfast option, one smoothie option and a fruit basket.  Unlike Blue Apron (which limits you to three a week and in limited combinations) you can order any amount you wish, the only caveat being that ordering less than $40 (2 meals for 2) means you pay $10 shipping.  Even when I want just two meals, I can add a smoothie or other to top off the $40 limit.

Though I find the Blue Apron ingredients slightly fresher I find the varied recipes and multiple order options much, much better from Home Chef.  On top of which I learn new techniques and keep the recipe files to recreate more later.  Sometime this fall Amazon has announced they will start their own version in league with Tyson so I will watch that carefully.  There are also additional options out there that are right now more expensive or more exotic or more complicated than I want.  Perfectly happy with Home Chef, thanks. 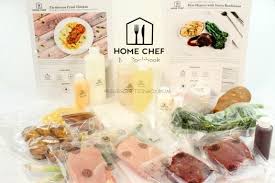