Recently took in Natasha, Pierre and the Great Comet of 1812 on Broadway.  It has received raves from the critics and word of mouth and I largely, but not entirely agree.

The transformation of the Imperial Theatre is astonishing.  Bold and eye popping it tickles the brain and brings you into an immersive environment that defies you to think you are in a Broadway venue.  The director has used this environment perfectly with the action wending its ways through the many passageways and remaining theatre aisles.  There have been half hearted attempts at this sort of thing over the years but this is truly exceptional.  Kudos to the director and creative team.

Josh Groban is very good, though with a limited role in the story.  Still, he is onstage (or on set) much of the time, plays several instruments and is a welcome presence.  Someday I really want to see Dave Molloy (the creator and writer of this piece) in the role he wrote for himself, but I was very much impressed with Groban’s Broadway debut.

Before this show I would have scoffed if you told me that an accordion heavy score would work on Broadway but this music is tremendous.  I can hardly wait to acquire the cast album.  It deserves a closer listen.

For the entire first act, every note, every move, I was on the edge of my seat leaning into to the action, the atmosphere, everything.  I was ready to rubber stamp the critics I have heard proclaim the work better than Hamilton.  Until after the intermission.  The second half is not bad but it is far short of the first half.  There is no problem getting wistful and reflective, but I felt the energy drain from the first act locomotive with little emotional pay off.  I am not a Broadway playwright nor do I have half the chops that this writer and director delivered.  But I do have an opinion, and I wish they had removed the interval, chopped thirty percent off the second half and drove this puppy through to the end.

But is it still highly, definitely worth seeing and worth staying through to the end.  Interested after you see it if you agree with what I experienced.  Most people apparently did not. 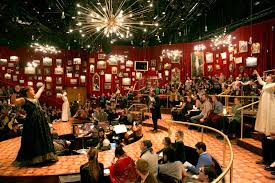