Important note for all vegans, vegetarians and those of a similar mind.  Please leave this blog post immediately.  Come back tomorrow for fun stuff but you will really hate this and I don’t want to upset you.  Please.

Also for all you young people or sheltered people or people who do not know and do not care to know where your food comes from.  All those who believe that meat magically appears in your supermarket cooler in immaculate cryogenic wrapped little trays, all nicely cleaned and separated and prepped for your enjoyment.  You will not want to see this.  Really, seriously, you may not understand this and it may disturb your quiet suburban comforts removed from the real world of real food.

Good, those people are all gone?  Let’s get to the good stuff.

When we asked my mother wanted for her 80th birthday, she said a pig roast.  We said, okay, but not sure we could do that.  She said, no, I want to do the pig roast and you can show up if you want to eat it.  We did.  All three of her children, a grandchild, Pamela, and various neighbors.  Mom had never roasted an entire pig but wanted to give it a try.

She purchased a suckling pig and discovered it was too large to fit in her oven and so had the head removed (to be used later for soup!). While I had lived some of my youth in farm-adjacent areas and was familiar with many real animal products, I had never seen or helped prepare an entire pig.  Mom marinated it with two bottles of Mojo Sour Orange marinade and an entire head of garlic, cloves separated and skinned.  I helped mom get it into the oven as you can see below it barely fit in the space (and had a nice inspection stamp).

As you can see from the next shot it was nicely bronzed a few hours later.  I had thought it would be sliced like a turkey but mom recommend tearing and pulling it from the carcass, which I did as you can see in the picture.  It was amazing and delicious and like no other pork I ever eaten.  We devoured most of it and mom has bones for broth and meat left over for sandwiches.  The cracklings (bronzed skin) was a special treat.

There was other good food to go alongside.  Asian slaw, potato salad, home (mom) pickled vegetables and other delights.  After the feast mom brought out a special cake for all the surrounding birthdays at the table.  She surprised me because it was a Black Forest Cake from a local German bakery that was exquisite (Black Forest is my absolute favorite so I was in pig heaven!).

After the success of the pig roast she is planning to buy a “fire box” (look it up on Amazon) which would allow her to do 40 or 70 pound animals in the future.  If you don’t wonder about other such feasts in the future you may wish to avert your eyes.

A pig roast, not for everyone, but a delicious treat.  Try it sometime.  It was a festive birthday present mom did for herself.  And I helped! (Get Whole Pig Helper at your grocery store today!) 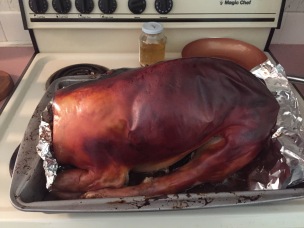 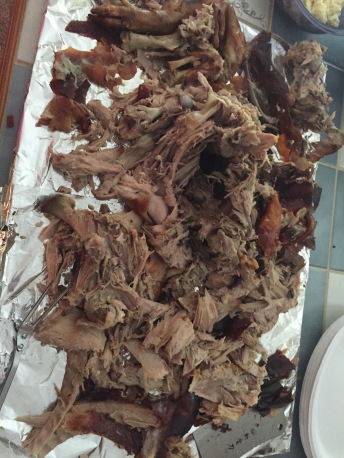 NEXT: A new play of mine will be in a festival!